Our biggest party of the year, the annual Valentine's Day "Get Off...Line" event and our Birthday bash, made quite a splash in 2007 and 2006, being the first-ever public dance party in the history of the oldest bathhouse in New York City. Held at the infamous Russian and Turkish Baths on 10th St, the party featured live gypsy music, free-flowing vodka and pierogies for all. DJs spun and people danced late into the night.

The 2006 party got the honor of being included in the Village Voice Best of 2006 as "Best (and Only) Russian-bathhouse Dance Party." It was also reviewed by The Lonely Pamphleteer (as well as a round of local blogs). 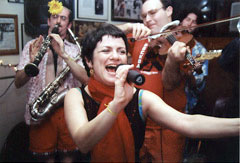 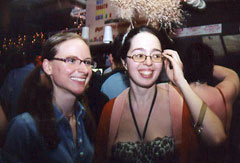 "Last Valentine's Day, Gemini and Scorpio, two sultry lasses who provide online dating advice as well as compelling reasons to get offline, hosted the first dance party to take place in the East Village's legendary Russian and Turkish Baths since it opened in 1892.

As with all G&S fetes, the crowd was quirky, comely, artistic, and friendly, and adding to the enticement, very nearly naked. Steamed pierogi and free-flowing iced vodka warmed the crowd and set the stage for the loose-limbed bacchanalia of Romashka, a New Yorkąbased Gypsy band led by Lithuania-born singer Inna Barmash.

Dressed in 1950s starlet swimsuits, flannel robes and flip-flops, smoking jackets, and '70s hot pants, the crowd danced, flirted, and indulged in the facilities--a 200-degree rock-fed sauna, steam rooms scented with lavender and eucalyptus, an icy pool, Swedish shower, and sundeck, which was covered in snow at the time--for five full hours. Those who didn't lock lips with the Russian bartender found longer-lasting fulfillment in a Dead Sea salt scrub or Russian massage. In the end, the only complaint was that the night didn't last long enough.

Gemini and Scorpio promise another trip to the bathhouse soon, but space is extremely limited. It's a good idea to monitor their website and sign up for the weekly event list, which offers ample warning for all their "Get Off . . . Line" G&S events." -- Silke Tudor, The Village Voice (more) 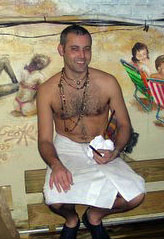 "The atmosphere, with celebrants in swimming pool attire, was convivial -- and the pirogen were terrific" -- David Zukerman, The Lonely Pamphleteer (more)