In 2009, we brough back our legendary Russian Baths parties as a monthly event, starting with a blowout bash on Valentine's Day featuring NYC's #1 Balkan party band 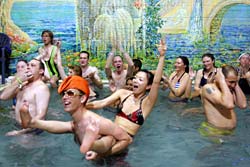 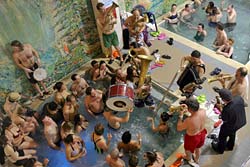 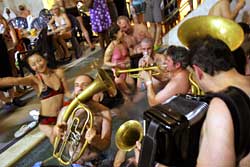 Ever popular, the party series garnered mentions in The Village Voice, Thrillist, The Brooklyn Paper, Brooklyn Based and NY Press, among others.

The photo on the left, by Larisa Fuchs (aka Miss Scorpio), ran in TimeOut's annual Photo Issue, and a small gallery of her other photos was showcased on TimeOut's site in conjunction with the issue.

"One of the coolest cheap activities posted to our recession-proof list." -- Brooklyn Based (more)

"An indie supergroup [Sway Machinery] has found a bizarre, but fitting, venue to unveil its new record." -- The Brooklyn Paper (more)

"Far and away one of the absurd events happening this weekend -- Gypsy-Bhangra-Balkan bacchanalia at the Banya Russian Steambaths." -- The Big Red Apple

"And remember: You'll be sweaty, so in memoriam of Douglas Adams, always carry a towel." -- NY Press (more) 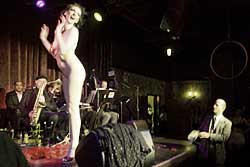 "An event worth wearing that ridiculous zoot suit for." -- TimeOutNY "Your Perfect Weekend" pick (more) 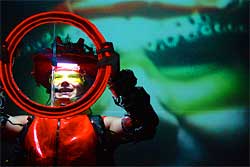 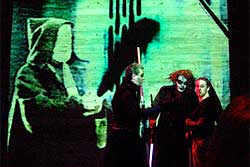 "Fasten your seatbelts--the lovely ladies Gemini and Scorpio, whose Russian-bathhouse dance party was included in our Best of New York issue in 2006, have teamed up with curator Leo Kuelbs to take you on an intergalactic trip." -- The Village Voice "Pick of the Week" (more)

"Gemini and Scorpio take bacchanalia quite seriously and this is sure to be a characteristically riotous event." -- The Big Red Apple 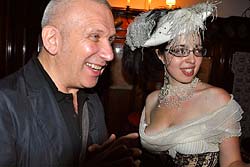 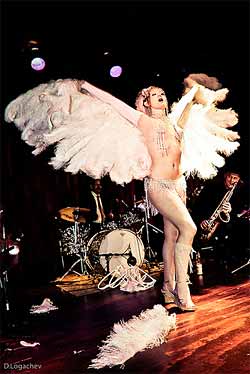 One of the most lavish events we've ever planned, this turn-of-the-century themed fete held in a 1892 mansion on Gramercy park at the exclusive Players club, Nouvelle Époque drew fantastic press accolades, including The New York Times. It also attracted the attention of fashion legend Jean-Paul Gaultier, who came to check it out because, "It sounded interesting."

The same week saw G&S party planning maven Miss Scorpio (aka Larisa Fuchs) give a full week's worth of events recommendations to TimeOut in her own section of the magazine. TimeOut also covered the event, in their "Hot Recap" online gallery.

"The rarefied drawing rooms of the 19th-century club the Players will be home to a turn-of-the-last-century celebration, complete with costumed guests, period music and retro entertainment...corsets and top hats tweaked with studs and leather are totally appropriate." -- The New York Times (more)

"A full-blown Belle Epoque salon and cabaret...be dazzled by a truly eclectic cabaret lineup...It'll be like the Algonquin Round Table with swing dancing (not very 1800s, but who cares?), like The Box sans seamy controversy (that we know of). Look sharp!" -- NBCNewYork (more)

"The evening will present a range of eclectic and classic activities that are not to be missed." -- Culture Mob (more)